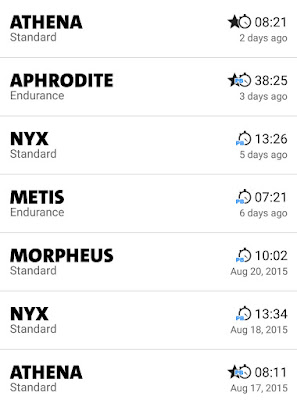 As a beginner, my hubby suggested that I do the NEW workout by Freeletics, Athena. The standard version sounds easy enough and no burpees! Dream come true. LOL! Truly easy except for sit-ups. My core has really hit rock bottom after giving birth. Body ache quite a bit but not too bad.

Day 2, again, my hubby suggested another NEW Freeletics workout, Nyx as he too wanted to try it out. In order to motivate me, he attempted the workout first while I observed. As my core has gone weak, this is a really tough and painful workout! True enough the next day, my abs hurt so bad, everytime my baby touch any part of the abs, I cry out in pain. I was moving in slow motion. The pain was so bad, it lasted 2 days after the workout!

As the abs still hurt, hubby suggested that I workout other parts of the body, upper and bottom. So happens, Morpheus (yes, also NEW!) does exactly that! Push-ups was my ultimate killer. My arms was way weaker than my abs. So after this workout, my arm and the muscle joints around my shoulder ached for another 2 days! Talk about self-punishing.

After trying several new workouts, time to go back to Metis. I've attempted this before but only did 2/3 as my knee hurt really bad. This time, I've decided to do Endurance level instead. Towards the end, I almost couldn't lift up my knees! Shows that just because it's Endurance level doesn't mean it's not challenging!

The time has come to attempt Nyx the second time. I wonder if it's a Free-athlete thing or it's just me, I wanna "enjoy" the pain in my abs again. I was motivated to break my PB and correct my standups form. HELL YEA! I did it! 8 secs faster and gosh, ZERO PAIN! My body must have adapted. That's FAST!

Ah.. Aphrodite. My hubby asked me to SUCK IT UP and do this major workout. I haven't even finish Round 1 and I wanted to quit. The knee was starting to act up, I was losing my focus. Then I told myself, at least finish Round 2! I did and then suddenly I felt hey, just 60 more reps of each exercise! My hubby spurred me on and when Round 5 ended, I felt a sense of victory! I thought I couldn't finish but I did! Hooray to me, the wuss!

Workout number 7, I thought I reward myself by doing easier ones. Athena again! As you can see, I did it 10 secs slower. I was very much disappointed but then I had some "unforeseen circumstances" that was roaming around me. My baby decided to exercise too? Oh well, next time then. 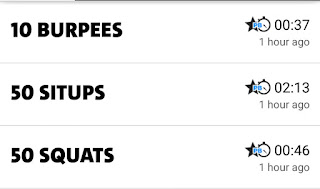 T'was a bad day of cranky baby and damn I felt so tired and lazy. It was already late and I've yet to exercise for the day! Decided to see how "FIT" I am now by challenging myself to a game of SPEED exercises. Started with speed lightning squats. I was going up and down like FLASH! I was panting away and I think my thighs still exist. Up next, let's put these flabby tummy to work! Could be better but hey, until I get those rock hard abs, I'm happy with this 2 minutes timing. Finally, 10 burpees just to SHIOK SENDIRI.

If you've never tried Freeletics or have only thought about it, don't wait. Do it today. Download the app. It's free. Let's continue to lose fat or die trying TOGETHER.
Posted by Unknown at 23:46 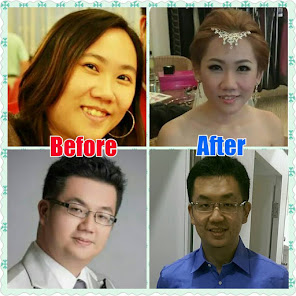 Our Before and After

Add us on Freeletics app

Got questions about:
1. Losing weight?
2. Eating healthy?
2. Staying fit?
3. Freeletics?
4. The pdf guides:
a. Cardio + Strength
b. Strength
Feel free to drop us, Shane and/or Nicole at shanesee03@gmail.com